2011 marked the 150th anniversary of the beginning of the War Between the States. It was of particular importance to the United Daughters of the Confederacy, an organization for female descendants of Confederate soldiers.

This was an old story from back in 2011, but it warrants telling again because this particular story was close to home and it help start a chain of like stories that follow.

The group includes 23 elderly women who are the last living daughters of those who served. One of them is black. Mattie Clyburn Rice is the second black “Real Daughter” to be recognized by the United Daughters of the Confederacy, an organization that was once exclusively for whites

Mattie Clyburn Rice, 88, spent years searching through archives to prove her father was a black Confederate. As she leafs through a notebook filled with official-looking papers, Rice stops to read a faded photocopy with details of her father’s military service.

“At Hilton Head while under fire of the enemy, he carried his master out of the field of fire on his shoulder, that he performed personal service for Robert E. Lee. That was his pension record,” Rice says.

Rice’s father, Weary Clyburn, applied for a Confederate pension in 1926, when he was about 85. Rice was 4 years old then, the daughter of a young mother and an elderly father who regaled her with stories of his time spent in South Carolina’s 12th Volunteer Unit. But when Rice repeated those stories as an adult, she was accused of spreading tall tales. “Nobody believed me. Nobody. Not even the children,” she says. “They are just beginning to believe, ’cause now they see it in print.”

Friends and family members doubted that Rice’s father, who was born a slave, supported Confederates. Military leaders also didn’t officially enlist blacks until the very tail end of the war.

“We’re always so excited when we find any Real Daughter, and immediately I found a chapter in her area, let the chapter know that we had this lady,” she says.

Rice is the second black Real Daughter to be recognized by an organization that was once exclusively for white women. Yet some progressive historians and Civil War buffs frown at her father’s story. They say the very term “black Confederate” supports the notion that the Civil War wasn’t about slavery. Even so, University of North Carolina history professor Fitz Brundage says the contributions of enslaved blacks to the war effort should be recognized.

“If Southern states in the early 20th century had given pensions to all the African-Americans who, as slaves, were conscripted to build trenches, work on railroads

[and] do all manner of heavy labor for the Confederate war cause, there should’ve been tens of thousands of African-Americans who received pensions,” he says.

But, Rice says, her father went to war willingly, though his story is complicated. He ran away with his best friend, who was white and the son of his master. Rice says no matter how historians view that narrative, she’s glad she proved her father contributed to the Confederate cause.

“I wanted the world to know what he did,” she says.

Rice says she never could have imagined joining the United Daughters of the Confederacy as a young woman growing up in the Jim Crow South. But she says times have changed: Not only is she a member, but two of her daughters are as well. 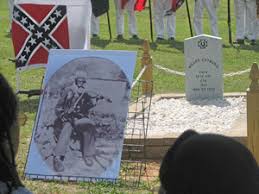 For those that attended the National Reunion in Concord, North Carolina, you had the rare pleasure of witnessing the family of Weary Clyburn come into the hall that weekend and be recognized for honoring their Confederate Soldier and hero. As they approached the front of the Convention they received a standing ovation.