On June 29, 2010 Randy Burbage asked me to put together a list of all known South Carolina related War Between the States Flags. He knew of my interest in SC Flags and we were both on the South Carolina Division, Sons of Confederate Veterans (SCSCV) Flag Committee, Burbage being the Chairman.

The first part of July, 2010, while reading an old auction catalogue about flags, I came across a small line about a SC flag of the 19th SC Infantry in a small museum in East Tennessee: “and a flag of the same pattern, identified to the 19th South Carolina, is in a small museum in Oak Ridge, Tn.” For the next two weeks I emailed and called SCV Camps and museums in that area. Then, on July 20, 2010, I called the Children’s Museum in Oak Ridge, TN. I talked with Ms. Margaret Allard, asking about the flag, and she stated, “Yes, we have it”. She further told me that it was not on display, that it did not fit in with their museum and their focus was on the Manhattan Project and WWII, but it had been on display once before in the past. She told me that it was donated to them in 1979 by a Dr. Henry Ruley and that he must had gotten it from Mrs. Fred Randall of Oak Ridge, the granddaughter of Private George W. Wise, of Company B, 19th SC Infantry, CSA. The museum had a copy of the “Oak Ridger” newspaper from March 14, 1955 of her holding the flag. The newspaper went on to state that Private Wise was a Color Bearer of the 19th SC, carrying the flag during the War Between The States. Wise lost his left arm below the elbow in the war. The granddaughter also told the newspaper in 1955 that the flag was used at the premier of Gone With The Wind at the Grand Theater in Atlanta.

On July 20, 2010 Mrs. Allard emailed me pictures of the flag, front and back. It was sewn onto a piece of linen cloth and mounted on a wooden frame. Then, on March 11, 2011, my wife, Ernestine, and I visited the Children’s Museum to see the flag. Ms. Allard took us into a back room were she had laid out the flag for us. She allowed us to take all the pictures we wanted of the flag, close ups and with us with the flag.  This was the first time there was talk about the flag coming back to SC. However, it was about them loaning the flag to the Confederate Relic Room Museum in SC. I gave her information on the Relic Room and Allen Roberson, Director of the Museum. 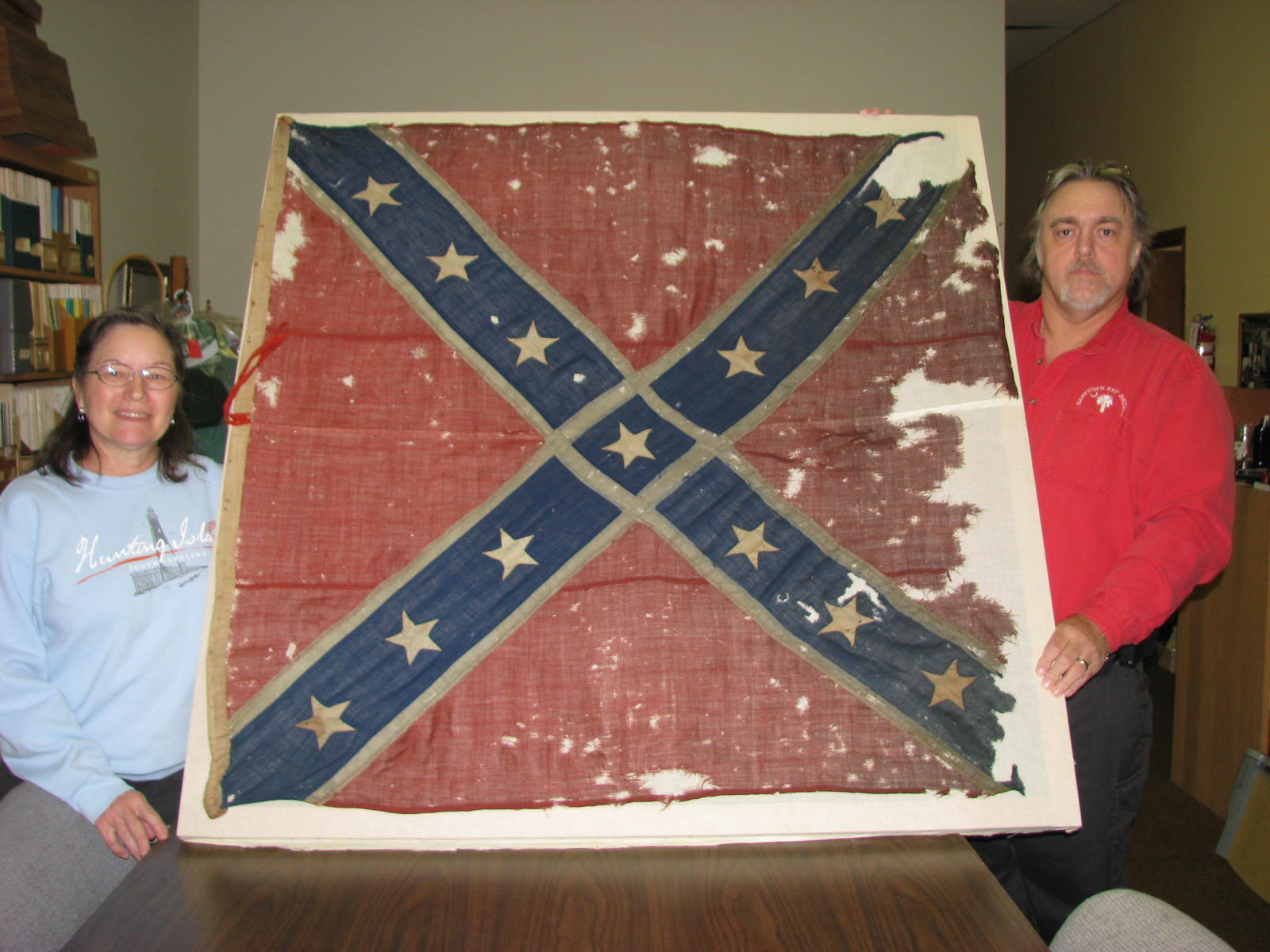 After returning home to South Carolina, I told Burbage about the meeting and seeing the flag. He later called me and asked me about talking with the Children’s Museum, to see if they might be interested in donating the flag to the State of South Carolina (SC Confederate Relic Room Museum) and the SCSCV – Flag Committee would make a large monetary donation to the Children’s Museum. Then, over the next three or four months, I talked with Ms. Allard three times answering questions and ensuring her that the flag would be going to the state and not the SCV, and answering what questions I could on the Relic Room. The Flag Committee was informed about the flag at their May 2011 committee meeting. I told them that I believed the museum would transfer the flag if it went to a state museum, but they (Children’s Museum) wanted to attempt to contact the family of the donor and that more money would be needed.

On October 29, 2011, at the flag committee meeting, it was voted on to increase the amount that the SCSCV Flag Committee would donate. Allen Roberson stated that the Relic Room would match it. It was here that it was decided to turn over the talks with the Children’s Museum to Allen Roberson. The Children’s Museum was asking about the Relic Room, and now the Relic Room had money involved, so it was decided that Roberson, the director of the museum, should take over the talks. Also, during this time period, a private collector, with connections to a museum in middle Tennessee, attempted to buy the flag for a lot more than we were offering.

On February 24, 2012 Burbage called to tell me that the Children’s Museum of Oak Ridge, TN had voted to sell the flag to the SC Confederate Relic Room Museum, but the price would be $50,000.00 with the Relic Room putting up half the money and the Flag Committee putting up half. On February 29, he emailed the committee about the agreement. A teleconference was also set for the committee for March 5, 2012 to vote on it and talk about fund raising so we would not use up what monies we had for other flags to be conserved. I made the motion to give the money and it was seconded by Donnie Rabourn. IT PASSED-UNANIMOUSLY. Roberson with the Relic Room worked out the details and a date was set for April 13th to pick up the flag. In the mean time we would be raising monies. Recognition has to go to Randy Burbage for personally raising more than half the money through his contacts (SCV part). At the SC Division Reunion on March 24, 2012 at Myrtle Beach, Burbage announced to the convention that the flag was to come home. We passed a hat to raise money towards the flag. Burbage passed the hat the FIRST time netting $755.00. We were hoping for a thousand so I passed the hat a second time and the members came through with another $495.00, a total of $1,250.00.

A few days before Roberson was to pick up the flag, the Children’s Museum had to delay the meeting due to a medical issue with their director, Ms. Mary Ann Damos. A new date was set for May 1st and 2nd. Allen Roberson and Rachel Cockrell, both of the SC Confederate Relic Room Museum, drove to Oak Ridge on the 1st and picked up and brought the Flag of the 19th SC Infantry home to South Carolina on the 2nd day of May 2012. 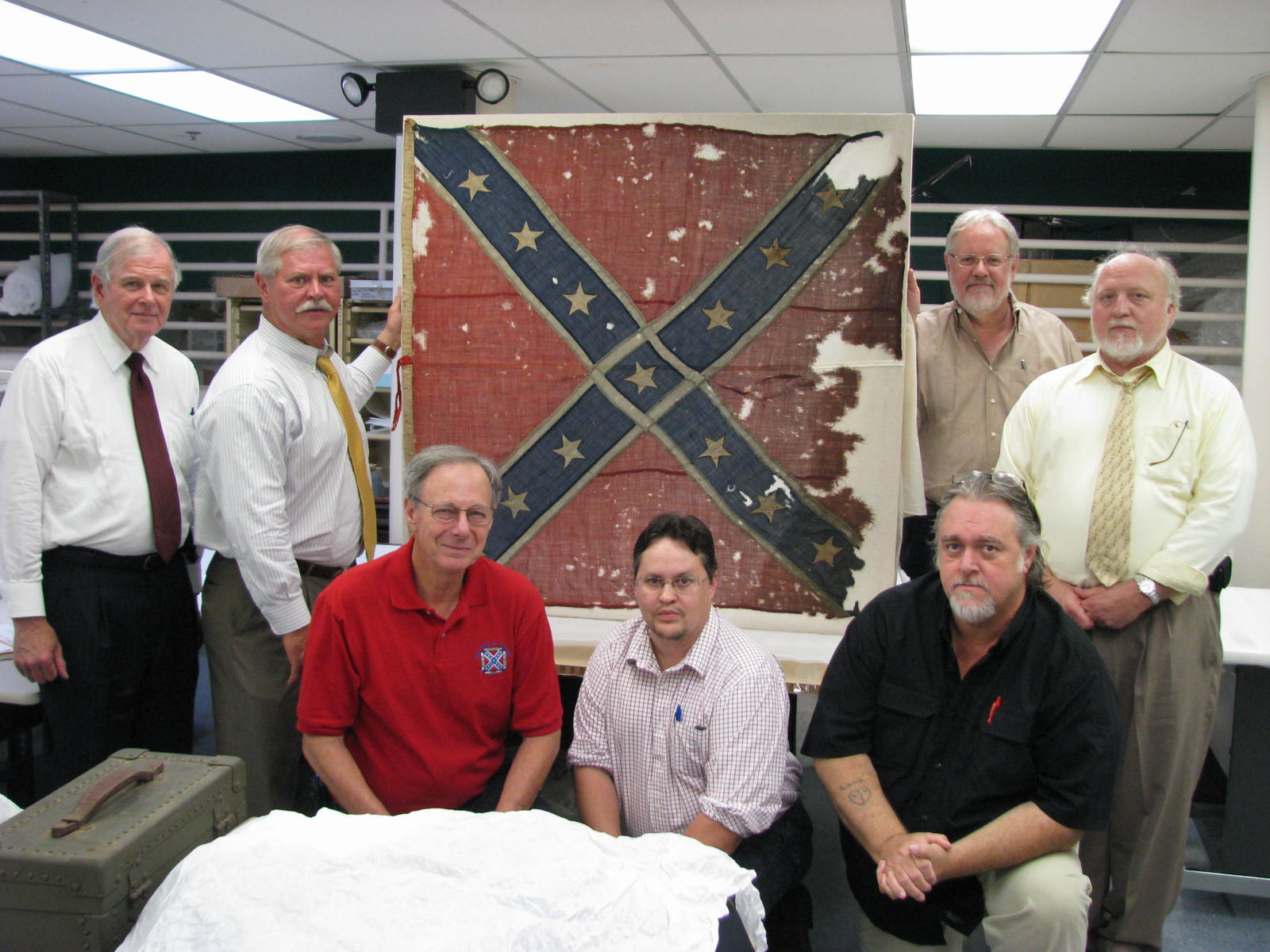 A flag of the 19th South Carolina Infantry
May 5, 2012 at the
SC Confederate Relic Room Museum in Columbia, SC.
SC SCV Flag Committee

A rare Confederate Flag from the Macon Georgia Arsenal. The flag is approximately 48” x 52”.

To View other South Carolina Flags that have been preserved in the past, please visit them here.

The Preservation of all the Confederate Flags that still exist are ongoing and The South Carolina Division is continuing to fulfill the Charge, to protect and present the history of the South to future generations.

If you would like to help in the preservation of any of our treasured flags, you can contribute and send your checks to the South Carolina Division Flag Preservation Committee.

Make your Donations by Mail to: